Reyna Mendoza is pursuing a Master's in Teaching and Teacher Education from the University of Arizona. She holds a Bachelor of Science in Literacy, Learning, and Leadership with an emphasis on Leadership for Equitable Access & Success, as well as an Associate’s in Science from Pima Community College.

Reyna was born and raised in South Tucson, Arizona. Her single mother and grandparents raised her. They were a hardworking Hispanic household, that valued tradition and family.

After graduating from San Miguel High School, Reyna pursued a degree in Architecture from the University of Arizona. However, she realized her calling was elsewhere and changed her major multiple times. During her first year at the University, her grandmother's dementia worsened. Reyna had to step up as a caregiver for her grandmother and earn extra income for the household. During the fall term of 2012, the University dismissed Reyna for poor academic standing. Despite this setback, Reyna did not stop her education and enrolled in Pima Community College. She married in 2014 and had a daughter in 2016, all while still being her grandmother's caregiver. Her grandmother passed in the Fall of 2016 before Reyna went on to graduate from Pima Community College. These events were all before her return to the University in the summer of 2018. Reyna officially divorced in the fall of 2019. As a single mother, she ended the year graduating as the Outstanding Senior for the College of Education.

Reyna has committed time to her community and the University. She served as Vice President of the first cohort of the College of Education Dean's Undergraduate Advisory Board. She also served as a College of Education Ambassador. Reyna has worked at her alma mater since 2012 and has held multiple positions involving student success, equitable services, and data management. Her current role is Student Data Manager and Enrollment Adviser. She has also served as the District and Lasallian liaison for Diversity, Equity, Inclusion, and Belonging. Reyna has also been on the governing board at Literacy Connects, where she worked with two task forces in Digital Literacy and Social Justice.

After graduation, Reyna plans to pursue her education for a doctorate so that she may become a professor. Then she may further help tomorrow's teachers with the lens that literacy is social justice. 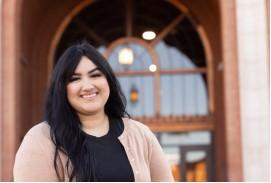