Elementary education alumna and current educational psychology graduate student Lauren Pierce was quoted in The Washington Post about a new app that aims to turn monotonous exercise into fun. A former cross-country athlete in high school and current coach of high school distance runners, she enjoys marathons and triathlons, and she credits the app with helping her become a faster runner. She likes the app so much that she has taken an uncompensated position in which she provides feedback to its developers and tests new features. Here's the full story.

Professor Patty Anders and Associate Professor of Practice Robert Wortman were interviewed about national reading rankings for this article in the Payson Roundup.

Richard Clift, the coordinator in our Worlds of Words, created a poster that won an award at the International Study Association on Teachers and Teaching Conference.

Associate Professor of Practice Barry Roth came in first place in the world (age group 60-64) in the 800 freestyle, swimming the race in just a few seconds over 10 minutes. Here's more on the swim champ. Roth also was quoted in this story about teacher shortages.

Alex Ruff has taught science at Marana High School since he graduated in 2006 and was recently featured in the UA News for his work with the Arizona State Museum's Stanley J. Olsen Laboratory of Zooarchaeology as part of his Arizona Partners in Science Award from the Tucson-based Research Corporation for Science Advancement. He also is the boys' volleyball coach. Here's more.

Alum Georgina Georgelos, who received a master's degree in bilingual/multicultural education in 1998 and is a teacher at Mary Belle McCorkle Academy of Excellence K-8 in TUSD, received the Evelyn Jay Excellence in Education Award from the Educational Enrichment Foundation. Here's more.

Assistant Professor of Practice Crystal Soltero and Zahra Karimi, a graduate assistant, combined their Schooling in America classes for a special night session with local school board members Kristel Foster (Tucson Unified School District) and Daniel Hernandez (Sunnyside Unified School District). Soltero adds, "It was a good opportunity to get their perspectives on the state and local issues that these students have been grappling with all semester. About 60 students took time out of their regular schedules to attend this special evening session."

Professor and Department Head Bruce Johnson was interviewed on Arizona Week about state changes in educational policy and its effect on curriculum.

Jesus Orduño, a 2013 grad of Teach Arizona, was named TUSD's High School Teacher of the Year. Jesus teaches Spanish at Pueblo High School. This is an impressive accomplishment for a second-year teacher! Read more in this article, which also highlights awards from three additional College of Education grads: Norma Flores, Richard Sanchez, and Leslie Franzblau Wirth.

Student Amanda Davidson was recognized as a "super volunteer" for her volunteer support of Catalina Foothills School District through her work at Esperero Canyon Middle School.

Gardening is effective for teaching because students experience what they are learning, said Constantinos Manoli, a staff member of the Cooper Center for Environmental Learning, which fosters environmental education through the College of Education. Here's more. 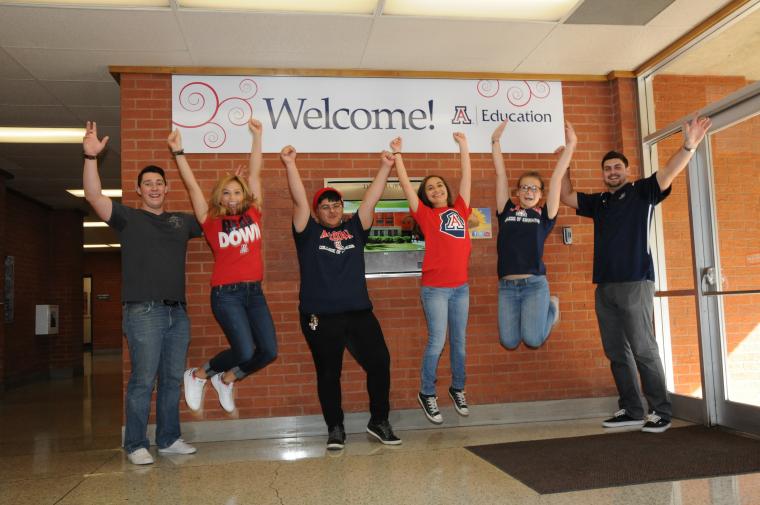